Financial Cryptographer: Creation of CBDCs will not Solve Cryptocurrency Problem 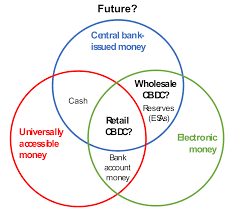 According to Roubini, the biggest problem posed by cryptocurrencies is their value’s volatile nature that creates risk to vendors when used as payment system. For instance, if BTC is used as legal tender, like what is happening in El Salvador, it poses a great risk both to borrowers and lenders, on top of high transaction fees. If the value of BTC drops by 30%, then the lender loses a lot of money; and if the value increases, then the borrower will be the one on the losing end. Furthermore, it does not make sense for people to think that the greatest invention presented by cryptocurrencies is digital cash because most payments have been digital for decades. He goes further by stating that for something to effectively be used as payments, then it has to be a stablecoin, where there is a stable price relative to a fiat currency.

Roubini also points out that stablecoins already exist in the form of fiat currencies that are being used by online payments. In addition, most stablecoins are scams, under-collateralized or not collateralized at all. That is why CBDCs are the only things he could see in the future. However, Grigg disagrees that CBDCs are the answer in resolving the unscalable and volatile nature of cryptocurrencies.

“CBDCs have a huge challenge ahead of them. The central banks have forgotten how to issue money. They did it many, many decades ago. The only central bank that’s done it recently is the ECB. So, they’re going to spend a lot of time learning how to issue a new money. And they are facing big challenges. I do not believe they are going to get to the end of that dream. They have a huge credibility problem. They will not be able to give a credible privacy promise to the users of CBDCs for various reasons…. They also are going to be exclusionary. They are going to do full KYC, full AML, which will lock out a large portion of their domestic populations and the rest of the world. You can’t use that stuff in Africa because the KYC isn’t a practical option,” Grigg argued.

Grigg further explains that CBDCs will just become competitors when it comes to digital payments. The only major advantage to them would be they are backed by central banks; but other than that, their limited reach will only be detrimental to their global adoption. The answer that will solve all these problems, is the creation of a scalable and stable payment system that uses a token that can be used as digital cash with fees that are much cheaper than the banks can offer. And that is BSV, which currently has a median fee of $0.00009 per transaction. The BSV network continues to scale and Teranode will be released this year that will make possible more than 50,000 transactions per second.